Well, I’ll probably get around to a couple of thoughtful, intelligent posts later this week, but while I’m still getting back into the swing of things work is taking up all my brain, so you get a list post instead. Science, philosophy, and history will have to wait a day or two.
Holiday Notes
Best Food: Mom’s pumpkin soup. Runners-up: Cranberry meatloaf, peppernuts, oysters. 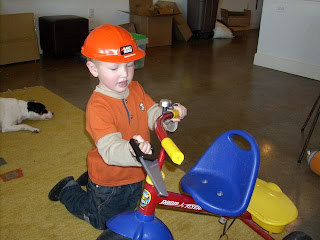 Cutest Child: Jackson Partch, as long as he has a cookie available. Here you can see him making critical adjustments to his tricycle. Milo, resigned to his fate, naps in the background, resting up for inevitable time when he will be chased around the apartment by a mad triker. Runner-up: Daniel Fuentes.

Best Gift to Anyone: My Dad got a Crosley vinyl-to-CD direct recorder from Mom, which translated into instant joy for him. I got to hear a Dylan bootleg LP, and also the famous Dave Van Ronk mono LP that led Dad to learn the…

Most Depressing Gift: See above.

Best Game: Sudoku, of which Brain Age has probably 100+. Sudoku is pretty ideal for a touch-driven computer game, because you don’t really remember these puzzles, and they contain relatively few symbols. Notation on the touch screen is also much cleaner than on paper. So there are advantages to this approach for the producer as well as the consumer. Needless to say, I really like my DS. Runner-up: Final Fantasy III, which lacks the cohesive story of later installments but is a very pleasant old-school RPG. Touch screen elements were obviously stapled on, however, and in most ways the game plays better using the buttons.

Best Airline: JetBlue, who gave me a $25 voucher because of a minor delay. That’s a consumer bill of rights that works. I wish they flew everywhere.

Best Airport Television: Charleston International (sic) Airport didn’t have TV, or at least had it turned down so low I couldn’t notice it. That makes it the winner.

Worst Airport Television: Chicago Midway, broadcasting WGN, which during my layover was airing what appeared to be the “Who Wants to be a Millionaire?” loudest idiot retrospective, followed by the Maury Povich paternity test special. (Dis)Honorable Mention: CNN’s Tony Harris, who just may be the worst interviewer and anchor on any news channel anywhere.

Best Seat: JetBlue. I couldn’t care less about the in-seat television — curiously, mine had its image reversed right-to-left, which I found very distracting, so I turned it off. But that legroom… wonderful, especially compared to the…

Worst Seat: On my AirTran flight from Atlanta back to Boston I was in the “fuselage” seat in the very back of a 737. I say “fuselage” because without a window it cannot really be a “window” seat.

Best Airport: There are no good airports.

Worst Airport: Dallas – Ft. Worth. I know you want me to say Atlanta, but it turned out that my connection there was just a few gates down, and the weather at that point was reasonably good up and down the coast, so I went through none of the hassle that can make Atlanta truly awful. DFW has a positively ridiculous layout, however, and a slower security line than even Logan. (Dis)Honorable Mention: Birmingham International (sic) Airport, for the longest baggage wait in history.

Strangest Airline Habit: Not leaving the whole can. Are you really saving that much money? I mean, with your purchasing volume, a can of Coke costs what, $0.30? If I’m paying $100 for an hour-long flight, does that $0.15 really make that much of a difference to your margin?

One Response to “Holiday Trip Rundown”