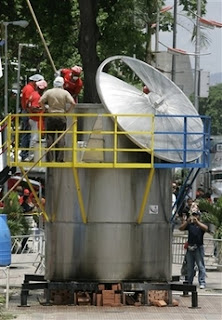 In an effort to prove that there really are no food-supply issues in his country, Venezuela’s soon-to-be dictator for life Hugo Chavez has cooked the world’s largest pot of soup. At a hefty 3,960 gallons, Chavez’ effort has outdone the previous record by 2,500 gallons. A spokesman estimated that the enormous vat held enough to feed more than 60,000 people, surely a relief to those Venezuelans facing a shortage of basic staples that has led to protectionist measures while the currency falters on the global market. Chavez also took the opportunity today to warn private schools that they must either submit to government control or be nationalized. Soon, too, he’ll be meeting with his ‘communist’ compatriots in FARC, ostensibly for the purpose of negotiating the release of their hostages, but maybe he’s just going to buy them a beer. Truly a banner day for the leading lord of South America.

The soupvat is only part of a larger celebration to prove that Venezuela’s economy is in good shape, even though the nation’s oil boom is playing out like a bust for the average citizen. Of course by now I should be getting used to examples of Chavez’ royal intentions, and to the fact that they’re apparently invisible to the masses in his country. On the other hand, the arrogation of regal authority by the Bush administration in response to the terrorist threat was met with far too little and too faint protest until only recently. Other examples include Putin’s Russia, which has clearly returned to Imperial ambitions (he’s even anointed a successor), and the disastrous state of affairs in Zimbabwe under Mugabe. Almost everywhere, it seems, legislatures of nations facing real or perceived threats have abdicated their authority in favor of the executive, with uniformly disastrous effects.

This demonstrates both the key strength and the major failing of republican governments. A republic only ever works because the corrupting influences and petty concerns of individual representatives are held in opposition to the corrupting influences and petty concerns of other representatives. For every Tom DeLay there is a Barney Frank, so to speak. Unfettered from this secret system of checks and balances, you get screwballs like Chavez and Mugabe running their countries into the ground, or Bush and Putin draining their treasuries on pointless military development and adventurism.

The main failing of republicanism is that it relies heavily on having these same divisions within the electorate. When the electorate unites in confrontation of a threat, a failure of the Republic is likely. Sometimes the danger passes without too much ill effect, as with WWII in the United States, for instance. However, when a threat, real or perceived (like American Imperialism, terrorists, or white people), is exploited by a charismatic leader with popular support, then freedom is almost certain to suffer, as in America, or perhaps perish entirely, as has happened in Zimbabwe and seems likely in Venezuela. There is never any greater threat to liberty than unity of the electorate, particularly unity behind a popular leader. The love affair doesn’t even have to last very long… just long enough for the leader to consolidate authority, as Chavez did (and Bush very nearly did). Once the leader is strong enough, he can dismantle his enemies and then even after the situation deteriorates (as in Zimbabwe) he can be relatively secure behind the apparatus he has assembled.

If you think we couldn’t go down the road that Zimbabwe, Venezuela, and Russia are on, you should ask yourself what would have happened if Bush hadn’t made the mistake of attacking Iraq. Without that quagmire destroying his popularity, would Democrats, even moderate ones, have taken power last year? Would the few voices of discontent that were raised against the Patriot Act and the Guantanamo prison have gained any traction had they not been united with those raised against the unjust and wasteful war? Despite the lives and treasure wasted in Iraq, the Republic is fortunate that Bush and the neocons made this mis-step. Otherwise Bush might even now be anointing his successor, while Chief Justice Harriet Miers writes decisions cementing the power of an Imperial Presidency that might take decades to reign in. 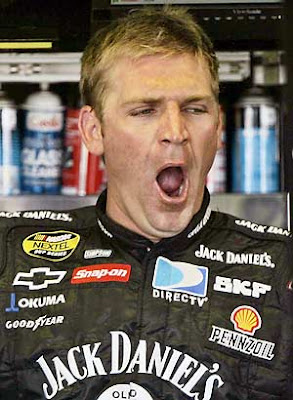