Our 500, that is. As I related in previous posts, our 500 MHz spectrometer was hamstrung by the signal from a local HDTV broadcast and subsequently had to be moved to a space in the basement of one of our research buildings. This process took about a year, because that space first had to be renovated, and in fact the last upgrades to the space won’t be finished for several days yet. But the 500 has moved into its new digs, (hopefully) finished quenching, and is ready to work. So yesterday I finally was able to collect an HSQC on it for the first time in many months.
So, here’s the spectrum I got: 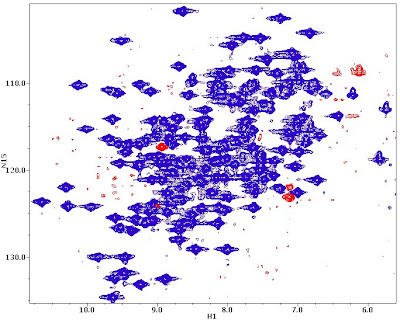 For comparison, here is the last HSQC taken before we stopped using it. Obviously, this is of a different protein, but both spectra were taken using the same probe on samples with the same concentration, at the same temperature. I countoured them identically. The only difference here is that the protein in the spectrum below has much better relaxation characteristics than that in the spectrum above. In theory, this should produce much better signal to noise. Oh, and also that when I took this spectrum I was also receiving data about cubic zirconium. 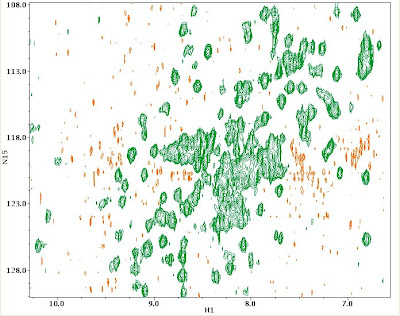 This is really good news for a couple of reasons. The first is simply that we have another magnet, and that allows us more flexibility in scheduling. No more fighting when people want 9 days of NMR time next week. The second thing is that, for a variety of reasons, some experiments just work better on a lower-field magnet. In particular, I have some experiments that are sensitive to chemical shift anisotropy and REX; using a lower-field magnet attenuates both these problems.