In one of the very first posts on this blog I related the story of how television ruined our 500 MHz spectrometer, at least when it came to pesky things like low-sensitivity spectra of biomolecules. That’s right, folks. Television not only rots your brain, it bricks your enormously expensive magnetic resonance spectrometer, at least if your proton Larmor frequency overlaps the broadcast band of the home shopping network. It turns out that this problem is actually rather difficult to fix: blocking out the television signal well enough to actually get reasonable spectra would have required lining the room with a considerable quantity of copper, an expensive proposition and one unlikely to be supported given that there are plans to tear that building down anyway. Instead it was proposed that we move the spectrometer to a room lined with a significant quantity of rock, i.e. the basement. 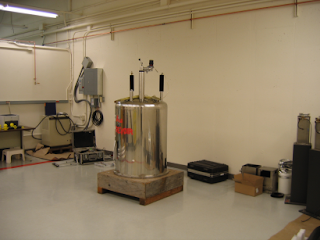 Unfortunately, the particular basement in question already had a spectrometer and rather a lot of other equipment and was anyway in need of some serious remodeling. The school managed to gather up the money for this, and just a few days ago the 500 was brought down from field and moved. Here (courtesy of Sara) is a picture of the old 500 in its new digs. This week was spent getting it down there and getting it back on its legs (obviously, they were removed for the trip). Tomorrow and Friday will be spent bringing it up to field. This will probably entail a quench.

For those of you who are not familiar with NMR spectrometers, these instruments have a superconducting coil to produce the magnetic field, and like most superconductors this must be kept extremely cold by some cryogen, in this case liquid helium. The liquid helium, in turn, is kept cold by being surrounded by liquid nitrogen. And the liquid nitrogen is insulated by a vacuum, just as in a thermos. When something goes wrong and the superconductivity is lost, an enormous amount of heat gets dumped into these cryogens and all that liquid gas turns into normal gaseous gas and emerges from the magnet with a sound resembling a freight train running over your ear. This video of a much smaller magnet quenching under controlled conditions should give you an idea of what’s to come.

A quench is dangerous, especially in a small space, because all this extra nitrogen and helium can lower the percentage of oxygen in the local area to below what can be tolerated by human beings. Because the particular basement room in question is so enormous this will likely not be a serious problem. Anyway, our 500 apparently has a history of quenching when it is brought to field, so it will likely be several more days before we are actually back to using it again. Or at least, we will once we get through with the referencing, calibrations, etc. that are necessary to actually get anything to work.

UPDATE: The magnet quenched on the afternoon of 3/31. Regrettably there wasn’t time to get the lab downstairs for a “Wizard of Oz” re-enactment.